Around 17:00
Dengaku performers make an appearance at Hareza
Ikebukuro for the pre-performance!

18:00
Performance starts at
TOKYO TATEMONO Brillia Hall (Toshima Arts and Culture Theatre).
*The venue will open after the pre-performance.

Reservations
・Please access the link below to reserve tickets (English only).
・Same-day tickets will also be distributed at the theater starting
at 16:00 on the day of the performance.
*Expected to be third-floor seats; distribution to end once
capacity is reached

Watch a scroll painting (emaki) spring to life in Ikebukuro!

The gorgeous costumes, elegant music, and lively dancing of Daidengaku invite the audience to enter the world of long ago in a thrilling performance. This special version features spatial direction by Creative Company NAKED for an extra touch of glamor.

Daidengaku was created by the Kyogen (traditional Japanese comic theater) actor Kosuke Nomura (Stage Name: Manzo Nomura VIII; 1959-2004) in collaboration with dancers, musicians, actors, and scholars, and based on the lost performing art of dengaku, which flourished throughout Japan from the Heian period (794-1185) to the Muromachi period (1338-1573). This outdoor performance is produced by Manzo Nomura IX, carrying on the legacy of his predecessors. Over 100 performers clad in costumes of different hues and hats decorated with brightly colored flowers dance to the gentle rhythms and melodies of old.

In addition, this year’s performance is a special version to celebrate the opening of the new theater! 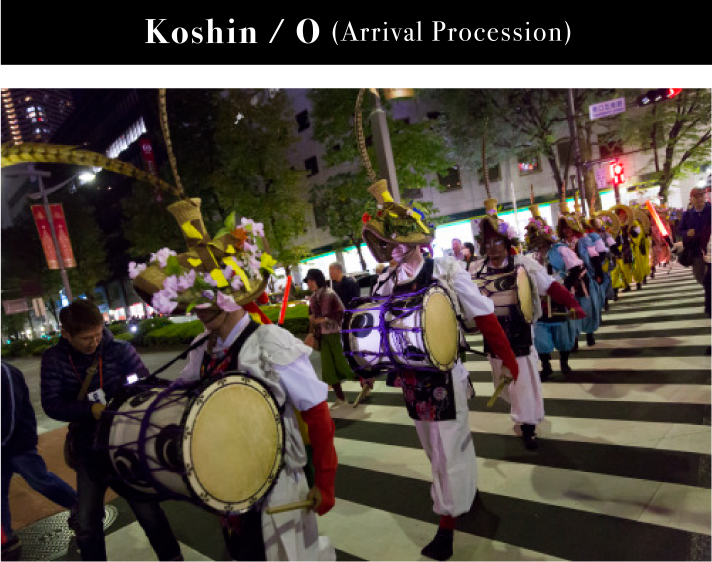 Pleasant sounds from long ago drift in, seemingly out of nowhere.
The sounds draw closer and closer, luring the audience into a world of fantasy. 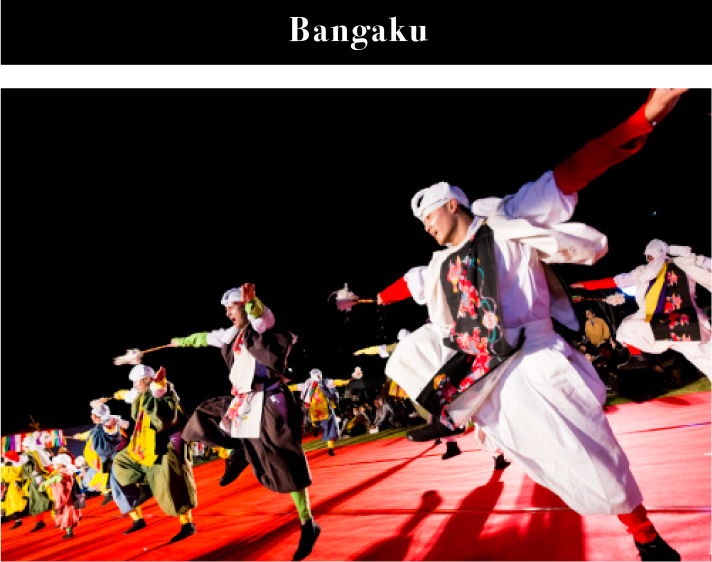 This dynamic, joyful dance is inspired by the sacred artistic rite of Yamabushi Kagura. The nimble, athletic dancers perform to an upbeat rhythm. 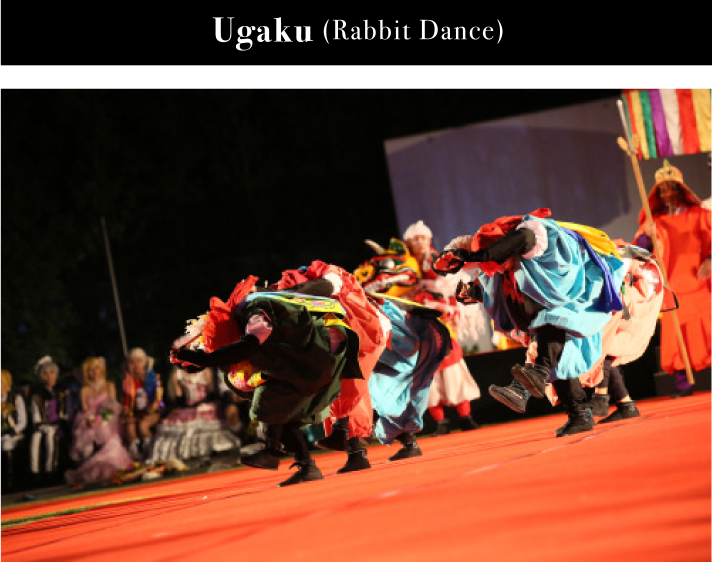 This dance is intended to represent the body and spiritual energy of a rabbit, as well as prayers for a bountiful harvest. A distinctive pattern of steps called uho (“rabbit walk”) appeases the spirits residing in the ground and purifies the space. 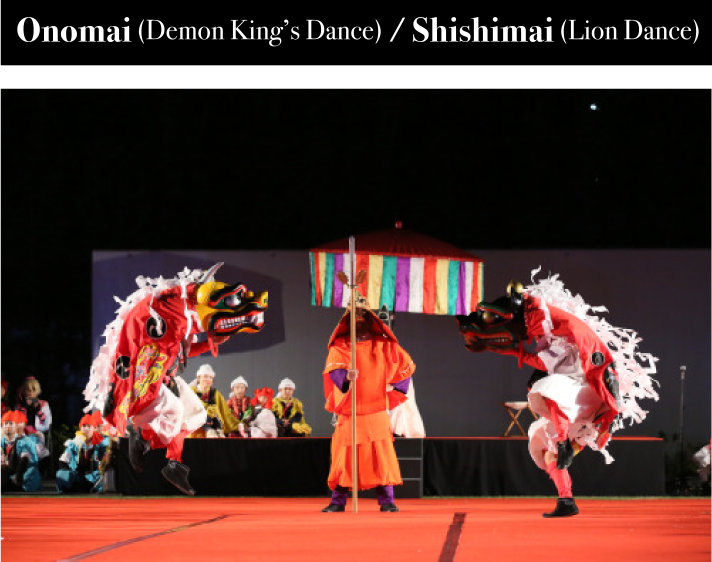 The first dance, onomai, appeases the demon’s gate and purifies the space. The “king” dances calmly and powerfully to the sounds of a flute and the thudding beat of the taiko drum.
Next, two lions awaken from slumber and leap, run, and intertwine to music with a lively tempo. Their dance is filled with a sense of clarity. 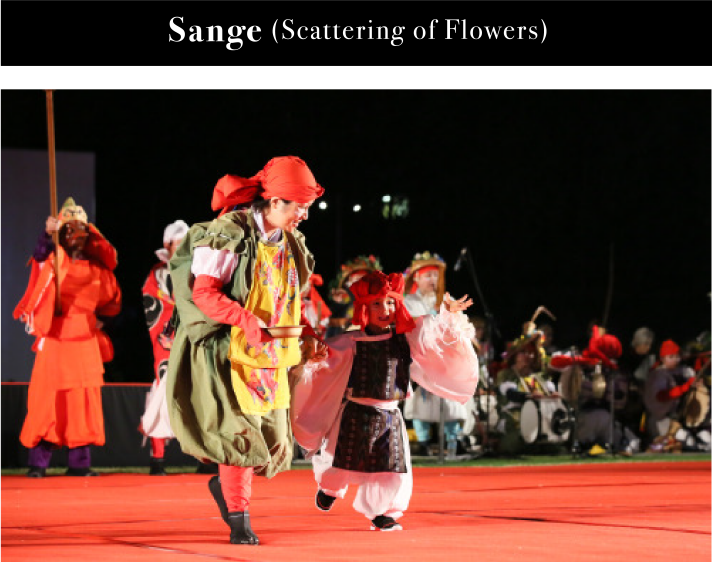 Young pages, symbolizing innocence, purify the garden of the gods. The flowers (paper) in five hues scattered by the children add touches of color to the venue. 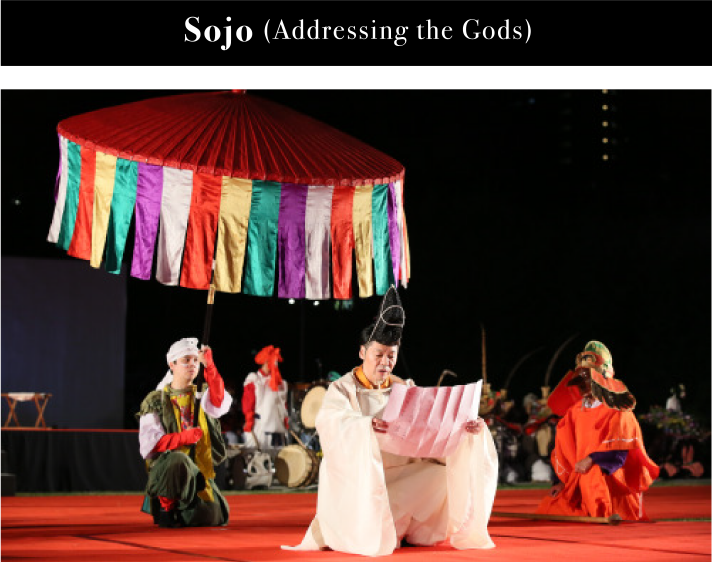 The leader of the troupe appears in a white costume and black-lacquered headgear and announces the arrival of the dengaku performers to the gods. His sonorous chanting, accompanied by piercing cries, spreads a solemn atmosphere all around.
“Now, let all those gathered here dance with joy and wild abandon.” 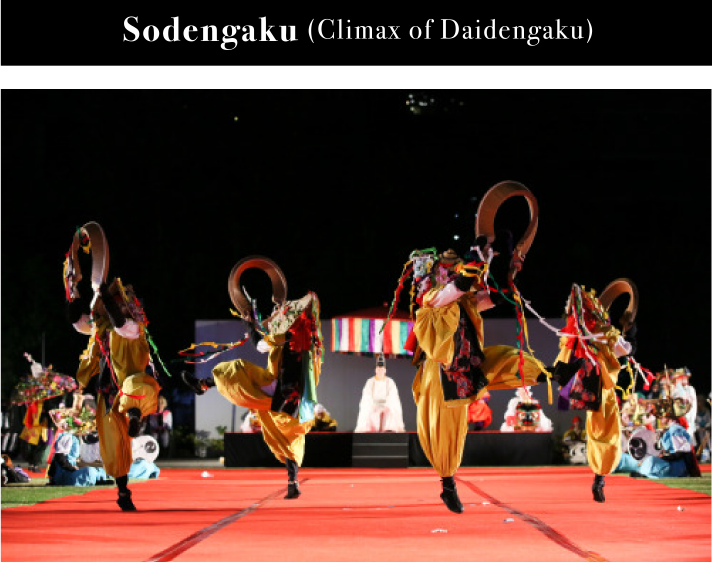 Energetic dancers swarm the space to the accompaniment of instruments like the kure-tsuzumi, a hand-drum hung at waist level, the sasara, a percussion instrument made of small wooden plates strung together, and the dobyoshi, bronze clappers. 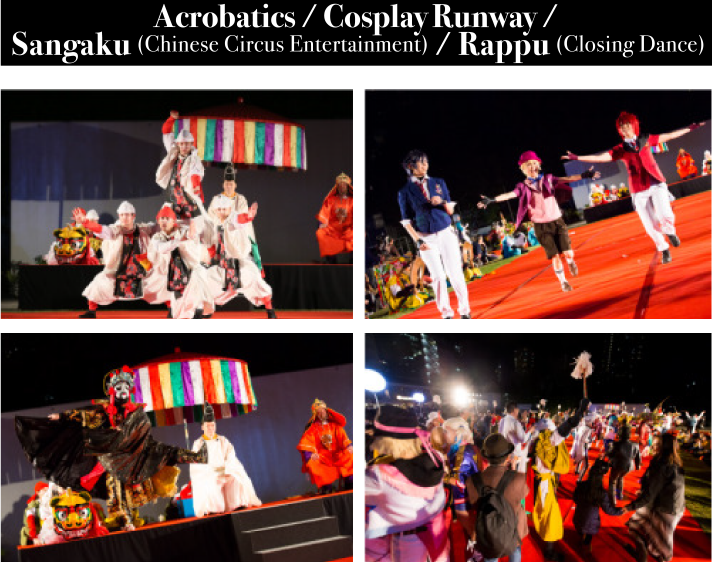 Next, witness thrilling performances by acrobats and cosplayers, as well as the breathtaking Chinese acrobatic art of sangaku. The frenzied energy of Daidengaku reaches its peak.
Finally, all the dancers and audience members come together in the rappu, the closing act of the performance.

The dengaku performers form a line once again, and exit to musical accompaniment.